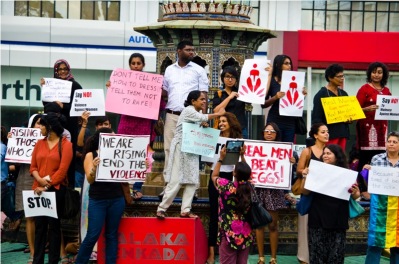 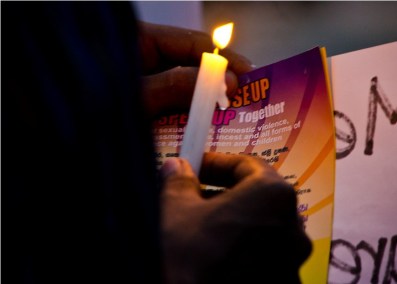 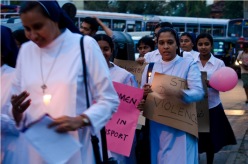 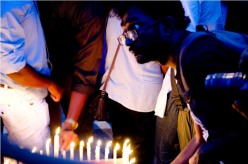 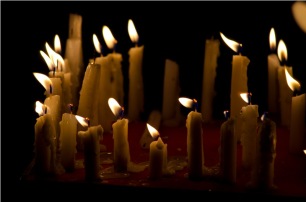 Meg is a member of the steering committee of Beyond Borders. She’s a journalist and a world class klutz. She blogs here. Her opinions are her own.

One Billion No More

One Billion Rising has been launched in several countries, and on Sunday Sri Lanka joined the growing list.

Women in Need conducted a walk the same day that led to Galle Face where OBR Sri Lanka  was launched, with motivating speeches from inspirational women, street theater, song and dance. 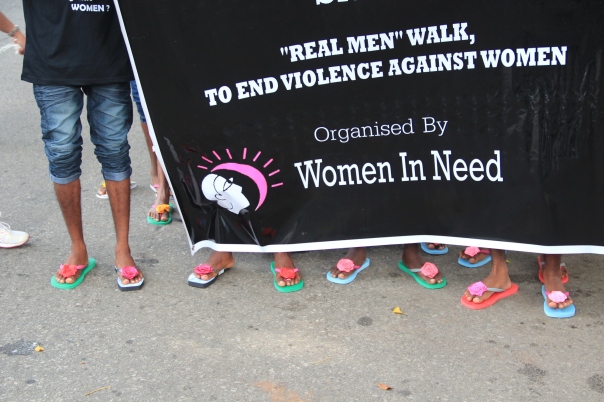 At Galle Face for the launching of OBR Sri Lanka! 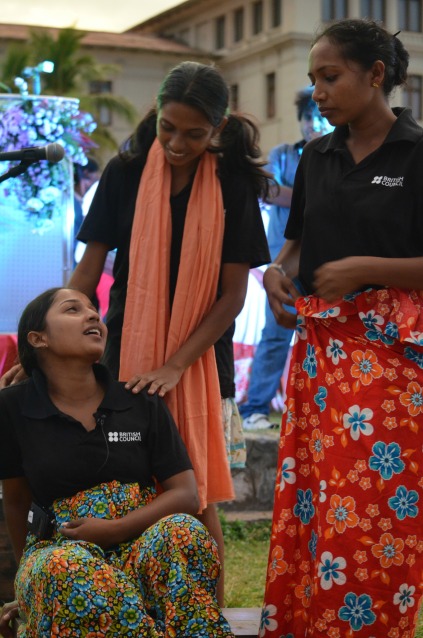 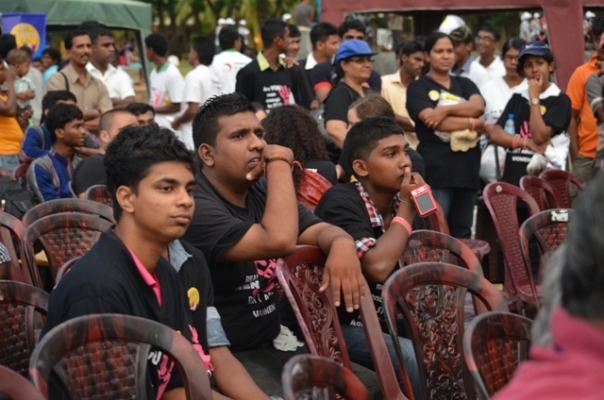 Real Men Do Not Harass Women

As most of my friends and I have had our fair share of encounters with perverts, mostly while travelling in public transport. Initially when a woman encounters such weird disturbing characters we become scared and even come to a point to be ashamed that maybe it was our fault for have invited such due to our dress code or so on. But due to the mentality of such perverts they actually tend to enjoy making a woman feel uncomfortable and vulnerable and probably assume we will not make a commotion and carry on with their pervert-ish acts.

It is well known that in society there exists people with diverse mentalities but harassment is not something any woman should face in order to satisfy anyone idiosyncrasies. Any person found to have caused harassment is possible to be faced with penal sanctions and no woman should stay quiet about it, speak up and stand up for all women! since no one should tolerate harassment.

One project that interested me was one carried out by Reach Out with the help of Beyond Borders that creates awareness through forum theatre relating to harassment of women in Sri Lanka. Unfortunately I could not commit to this project due to busy work schedules, but something anyone should be a part of, since it speaks of a social issue that needs to be addressed by all.

Recently I came across a post by this site called Hollaback, which is a global movement to end street harassment and HollabackMumbai is where Indian women can share their experiences of such harassment and create awareness. One article that caught my eye was the following, and thought of sharing it with everyone.

Join Beyond Borders, because we’re hiring

We are now calling for applications for young people between the ages 18 to 24 who are passionate about social and development issues and wanting a platform. Please find out about who we are and what we do (but considering that you’re here reading this, we would assume you would know these things), and if you are interested in joining us, do the following:

Unlike many other organizations, canvassing will actually get you places. We want to ensure that you’re energetic and that you want to get things done, so if you manage to convince us that you are what we’re looking for, well good for you. Have a look around the blog, and pop over to our website as well.

Entrance by invitation only, if you want one email us to info[at]beyondborders.lk with a couple of lines explaining your interest in attending the play.

What is Forum Theatre?
Forum theater began when Augusto Boal had the brilliant idea of allowing the audience to stop, modify and change the course of his drama performances; enhancing the overall experience of everyone involved in a novel manner. Today, this particular branch of theatre is known as Forum Theater.

FT is useful in bringing out complex issues attached to sensitive social topics and has been used by Beyond Borders to highlight a range of social issues during the last few years.

What is ‘Jerk?’
This time around the Forum Theater tackles the tricky subject of the misconceptions and issues facing youngsters with Attention-Deficit Hyperactivity Disorder (ADHD). It takes you through the roller coaster ride of our protagonist Rajeev, as he copes with the effects of ADHD and society’s often antagonistic reactions to it. It will be a morning of exciting infotainment and learning.

Some YaTV content is now happily available  on twitter and the Sri Lanka Today program seem to be runing their own blog.

TEDxColombo which we invited our readers for, went off quite well. The audience was good, and the speakers on board for the event did it justice and it sparked some controversy. All in a good day’s work.

While we’re awaiting approval from TED to put the videos up, we do have a few photos from the event up over at our flickr stream. If you’d like to get a glimpse  of the ‘conversation’ after TEDx Colombo, see the dedicated twitter account.

Beyond Borders is hosting a platform where ideas for the future will be unveiled and discussed by leading academics, activists and media persons of Sri Lanka, in the form of TEDxColombo.

TED stands for Technology, Entertainment, Design, and the TED conferences started out as an event bringing together people from those three worlds. Since then its scope has become ever broader.

Speakers at the Global TED event over the years include Sir Timothy John Berners-Lee, credited with inventing the World Wide Web, Bill Clinton, the 42nd President of the United States of America, and world renowned performance poet Rives. TEDx is based on the same model, and we would also air some of our favoirite TED Talks during the event.

The themes of the presentations range from addressing the issue of the language barrier, to revamping the Sri Lankan media culture. The event will be held on the 19th of July, at Punchi Theatre, Colombo 8 from 9:00 am onwards. Tickets will be priced at Rs. 150/=, and would grant access to all the sessions.

The event programme and registration details are available here. Bookings for tickets can be made either by calling 0774186560, or emailing tedxcol[at]beyondbordes.lk. Come. We’d love to have you there.

“The Best cup of Nestomalt I’ve had in my life!!!”

I’m going to be starting with the end this time…it was approximately 7 pm and two of us were just finishing off our last distribution of some tea, sugar and “Nestomalt,” to the last ward. Once we were done, we decided to sit down and have a little chat with some of the patients and their families. We barely had any time to have a chat with anyone this time, because distribution was an absolute “logistical nightmare!” Anyway, as a direct result of a part Sinhala, part Tamil, part English and part sign language chat I had with one of the families, they discovered that we hadn’t had lunch as yet. And to make matters worse, I told them that I was “setthu poochi” (dead)! After having a good laugh possibly at my heavily accented Tamil, and also what I said, I guess, I moved to another group of patients, and as far as I was concerned, that was the end of that. That was of course until, around 10 minutes later, I get a little tap on my shoulder and a little girl hands me a little stainless steel tumbler full of piping hot Nestomalt!

END_OF_DOCUMENT_TOKEN_TO_BE_REPLACED 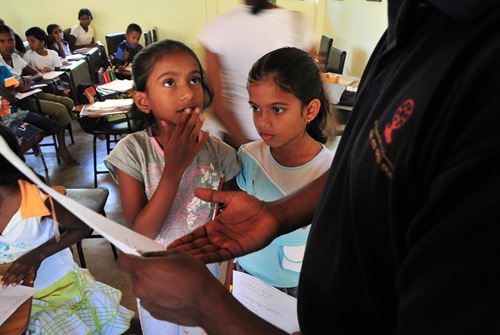 I was not a student who academically excelled in School. Whilst scoring high in subject such as Maths and Science, I was horrible at the subjects that required one to “study” for them. And even though I find writing absolutely enjoyable now, it was not so when I was in school. My teachers made me hate the subject.

A lot of people have been arguing for comprehensive reforms in Sri Lanka’s education sector. This would have to come in the form of reforming the methodology of teaching, reforming the systems of learning, and a complete revamp of the curricula.

Looking at how state funded schools are being used, we have to realize that schools are useless things, most of the time. Let me explain.